Saptashrungi Gadh is a Hindu pilgrimage site near Vani, Nashik, Maharashtra. The name ‘Sapta’ stands for ‘Seven’ and ‘Shrunga’ for ‘Peaks’. Thus, the temple is surrounded by seven hills. Saptashrungi temple is one of the 51 Shakti Peethas in India. A large number of devotees visit Vani Devi temple every day.

I published this post last year (May 2015) as a photo gallery. I casually posted photos of Saptashrungi temple I took during trip to Vani. Eventually, the post started getting top ranking on Google, and by today (February 2016) it has more than 7000 views.

I’m updating original article, “Saptashrungi Devi Temple Vani – A Photo Tour, History & Story”, with intention to make it most useful to readers. Like other travel posts, photos will be the essence. 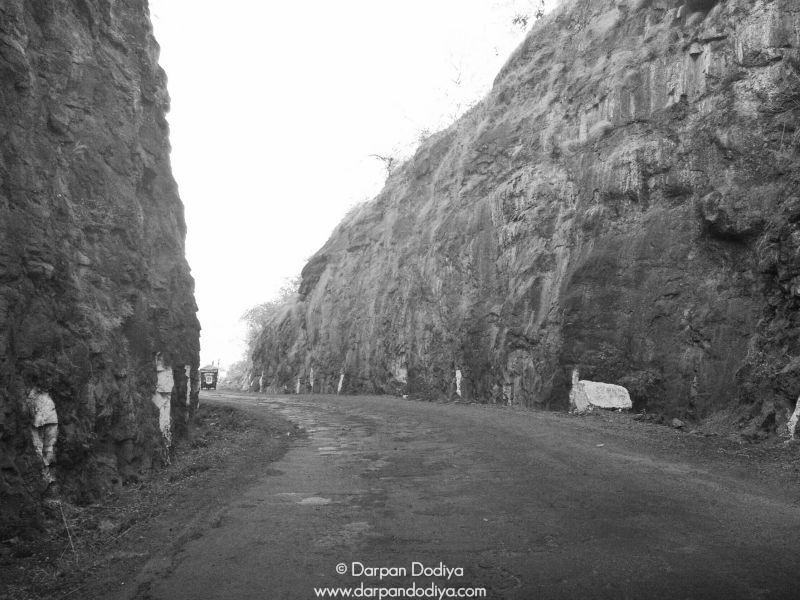 I had a week off in college so I packed bags and set off for home.

On one bright Sunday morning, mom pinned a one-day-trip plan to Saputara and Saptashrungi devi temple.

Within a couple of hours, we were seen passing through the hilly terrains of Sahyadri range. Impromptu trips always turn out as splendid ones, so was the case with trip to Saptashrungi devi. 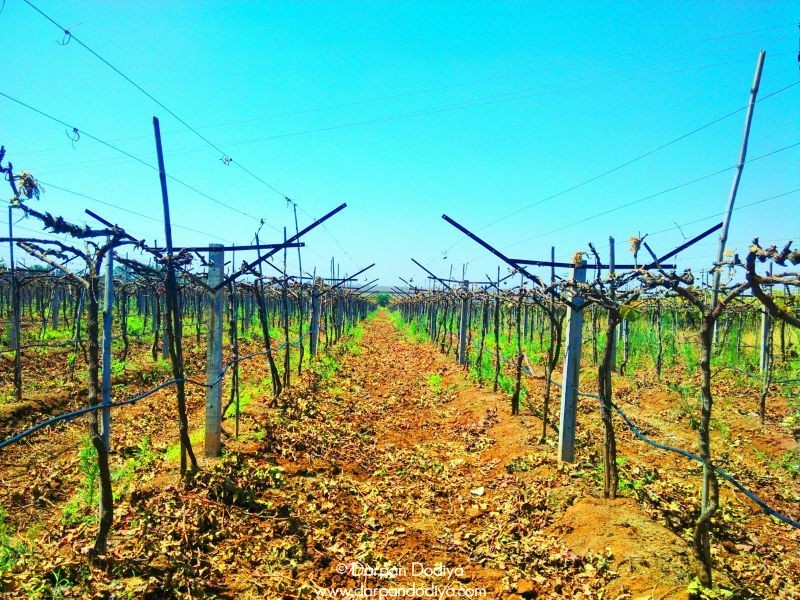 In one grape farm on Saputara Vani road

Our time of visit fell under Chaitra Navratri. During Navratri period, fair is organized on the hill top. Road to Saptashrungi Garh is made unavailable for public access — and that’s for good. Traffic problems come down to zero.

Bus from Nanduri to Saptashrungi I’d like to praise management of Saptashrungi. The systematic way they used to manage traffic and huge crowd is commendable.

In this post, you’d find many photos of fair too. It’s a catch! You might not get to see the same scenes during rest of the year. 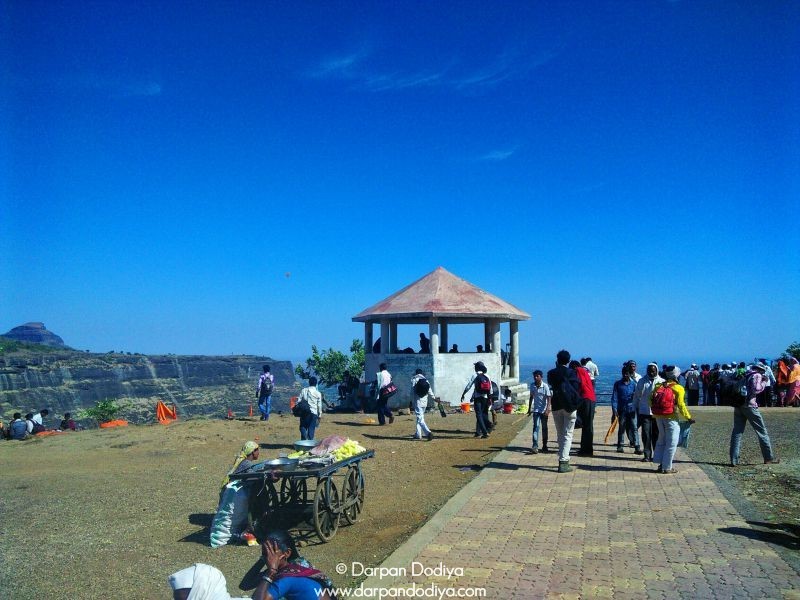 Saptashrungi is a hill range consisting of seven hills locally called Ghads and form part of the Sahyadri Range of hills in Western Ghats.

The Dhodap, in the center of this mountain range, is the highest peak with an elevation of 4,600 feet (1,400 m), and Saptasrungi is towards its west.

There are 108 water bodies (ponds) located in the watershed of these hills, which are called Kundas.

Nanduri and Vani are the villages nearest to the temple, which are situated at the foot of the hills. 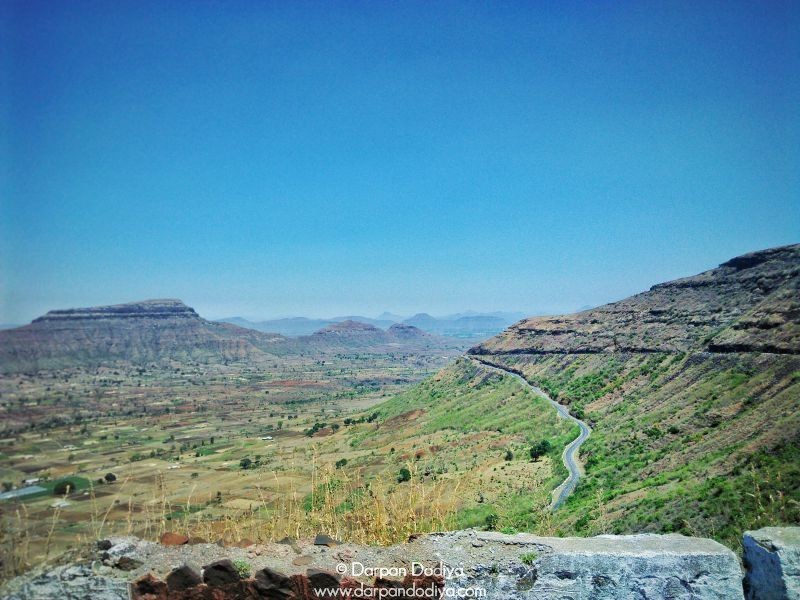 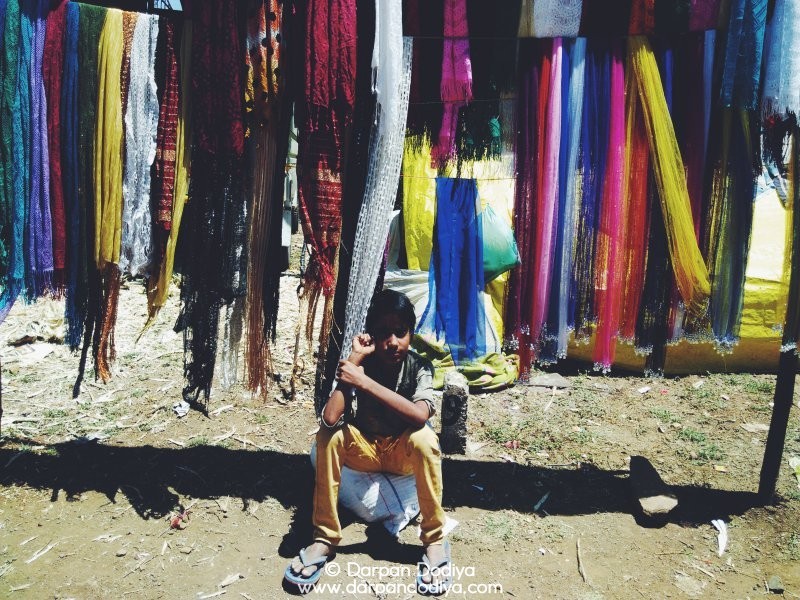 As with the case with many Indian temples and Goddess, Saptashrungi too has quite a few of them. Let’s go over them one by one with help of Wikipedia.

Yesterday, I’ve received an detailed and insightful comment on this article by Dr. Damodar Mandore.

”
I too am a fan of Vani and had been visiting here since my childhood during the Chaitrotsava.(This year too I was there).

I would be glad, if at all you could add a bit more about the story of “Parsaram Bala”, who is said to be the younger brother of Saptashrungi Devi and his temple is located exactly behind that of Devi. Local story/belief is that, Devi hid him behind her during some emergency situation and thus his statue is behind her and so is the temple. For visiting this temple you have to take the parikrama marg and reach exactly half way, and directionally opposite side of the hill. I had visited there around a decade back or so.

The chaitrotsava was very exciting, thrilling and joyful, in the past days (Though facilities were less, but joy was good in a different perception), where you could see many poor beggars sleeping on beds of thorn in full noon time, under naked sun, some hand emerging out of ground and chanting string of bead and many such adventurous and rare activities. In fact the adventure used to begin right the way while climbing up the hill via the narrow road and two way traffic with some indisciplined and speedy drivers used to take your breath away. But, yes, as mentioned by you, the new facilities have definitely made the trip a safe and smooth ride these days and many new technologies are being roped in for further betterment.

One more thing that I wish to add is a story/belief that during the end of Pournima, a person from a particular family, carries the flag of the temple and after hoisting it secretly in the night time, when he emerges out, all his white clothes are torn. Nobody knows about the whereabouts of this path and the guy.
” 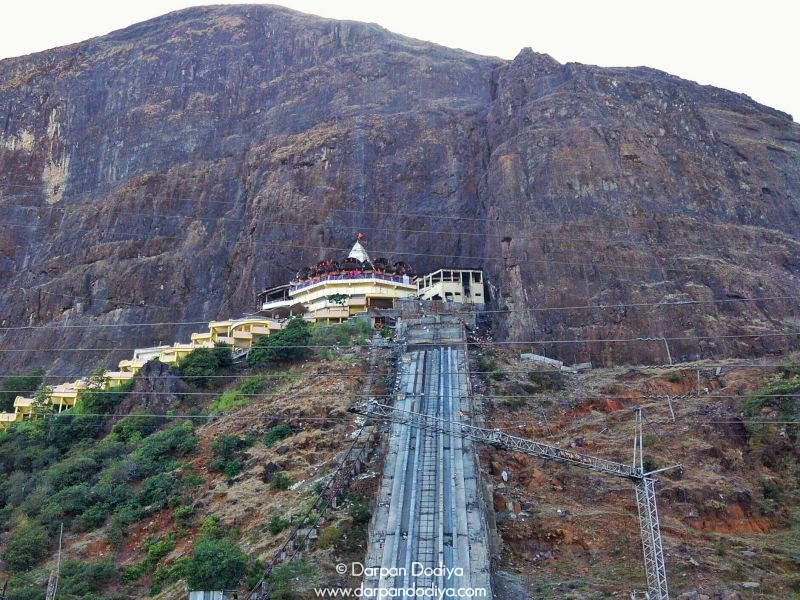 Saptashrungi Devi Is Also Known As…

Brahmasvarupini – one who has form of Brahma as the Goddess is reported to have appeared from the kamandalu (water-pot) of the creator-god Brahma. 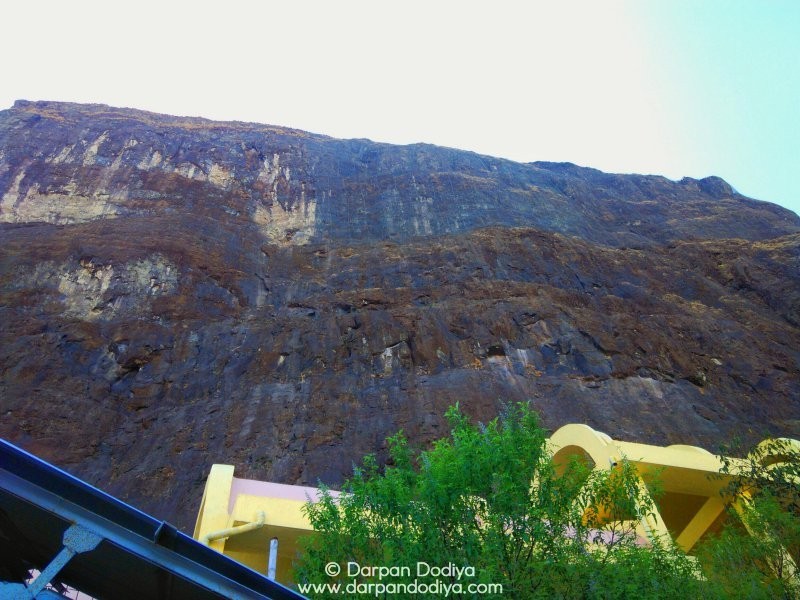 If you’re visiting by own vehicle, there are many ways you can reach to Devi temple. Google Maps would be your best guide. 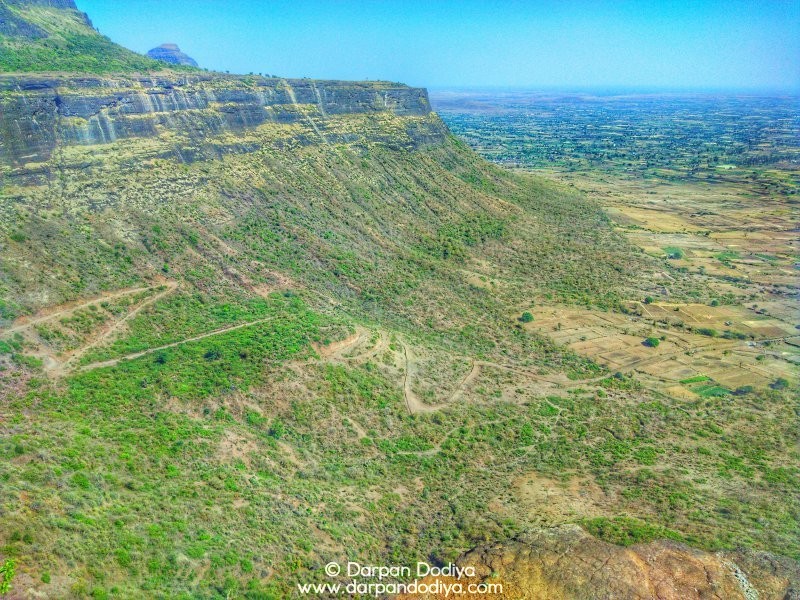 After a fatal bus accident in 2008 which resulted in death of 43 people, security measures have been taken by authorities. The circumlocutory path around the Sapatashrungi hill has now barricades and warning signs. Though I visited Sapatashrungi in April and enjoyed the cool winds, monsoon should’ve your preferred time for a trip to Sapatashrungi.

Sapatashrungi has elavation of 1000+ meters. Thus even in summer, sun won’t burn you. 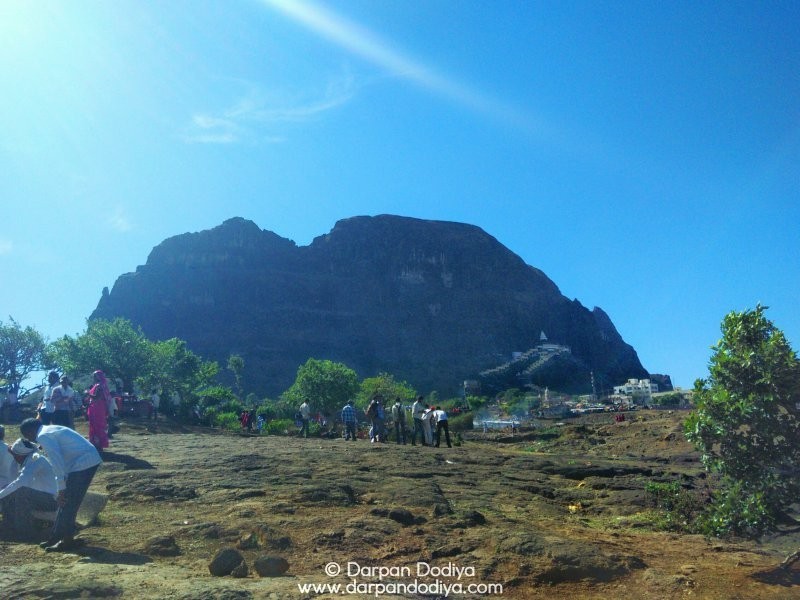 Live Darshan at: (Unfortunately, this link is no more online now. It seems like the official Saptashringi site is dead now. :/ )

This peak is highest in all seven 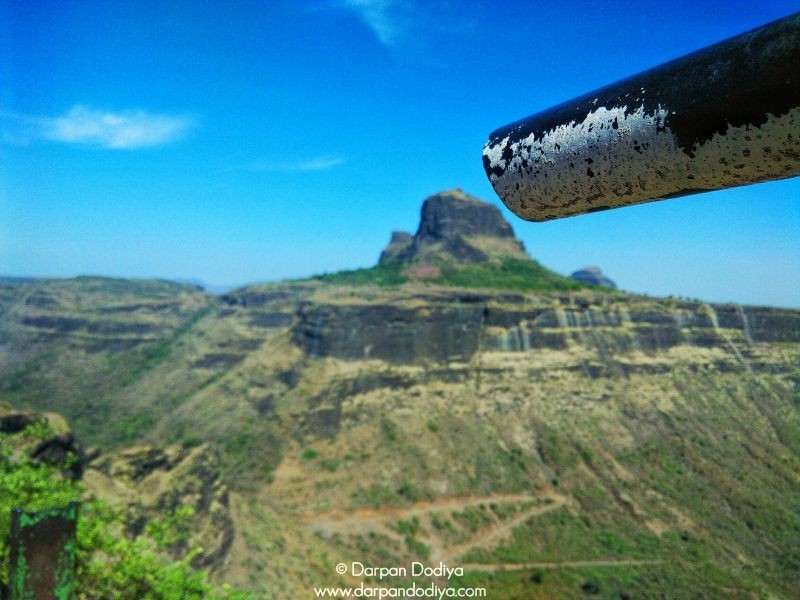 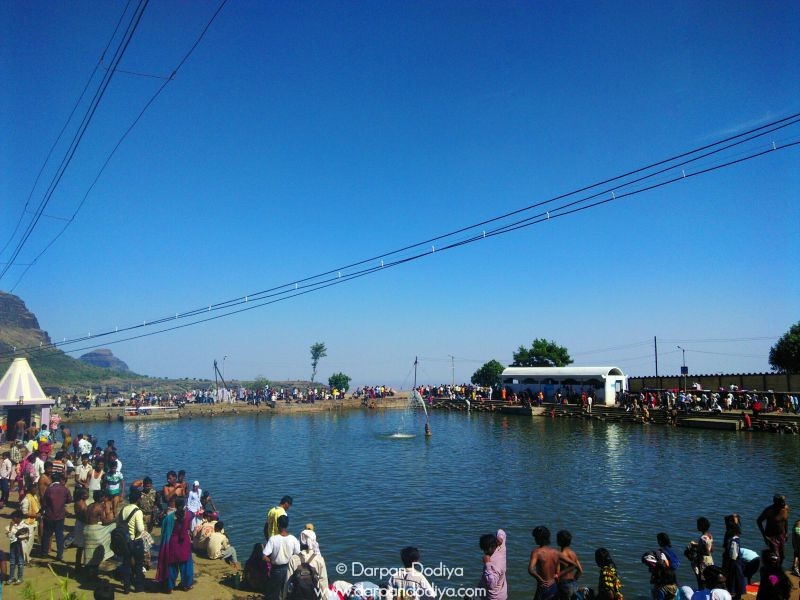 Food, Accommodation and Facilities At Sapatashrungi

While I was wandering in streets of Sapatashrungi, I had seen many restaurants. Food options are in abundance.

For lodging, trust has built Dharmshala with capacity of 190 rooms.

Dharmshala office is open 24 hours. No reservations. Rooms are offered for a day.

As far as I can remember, there’s a school, bank, ATM and hospital too was present in Sapatashrungi.

View of downtown from top. As easily noticeable, lack of free space has stopped development of Saptashrungi. After Darshan of Sapatashrungi Devi, we started our return journey to home via Saputara.

If you’re going towards Gujarat, from Nanduri, take route

The landscapes are exqusite! I had total fun capturing photos… 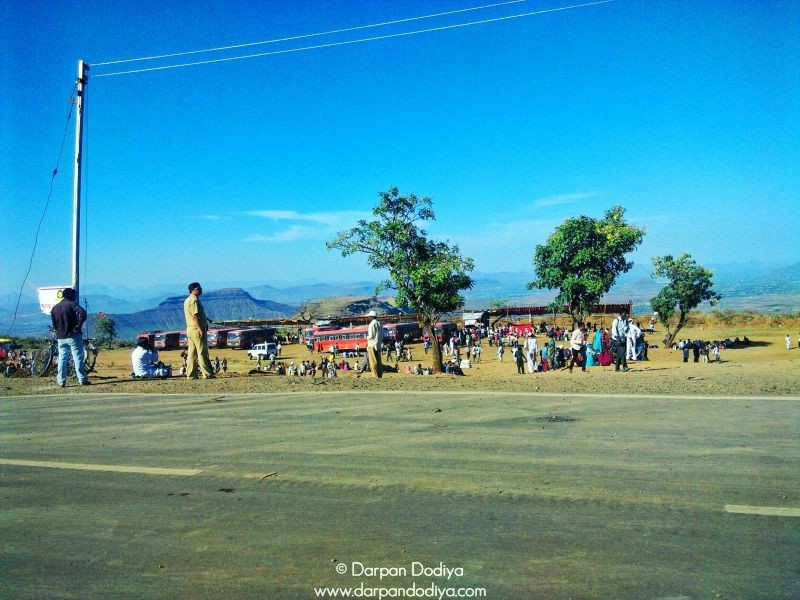 A minimal streetlight photo while waiting for bus 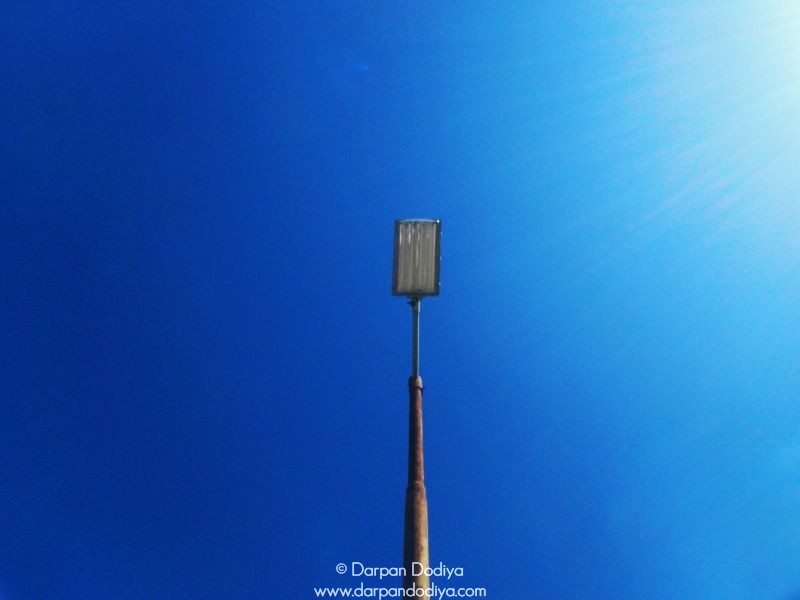 Somewhere near Hatgad. I told you, the landscapes are breathtaking! This is one of my favorite photos! All photos are from April 2015. Taken by Kunj Dodiya and me. From Redmi 1S.